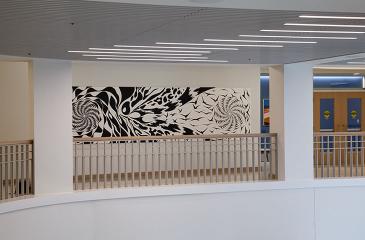 “Creation” Artwork by Former U of M Pediatrician Donated to MIDB

The MIDB recently received a donation of artwork by former U of M pediatrician Robert Fisch, MD, who was a world-renowned expert in phenylketonuria. A survivor of the Holocaust, Fisch shared his experiences through writing and art.

He previously described the concept for the large painting, Creation, as, "the painting on the left side shows a circular hurricane-like form, like our minds which have many thoughts and most of them eventually go nowhere and disappear. So that from the circular thing you can see that most of them will go on both sides and eventually break apart and dissolve. On the other hand, one form (or thought) eventually became more and more a specific and definite form; in this case, a single bird. From that bird came two birds; and they are producing others which, on the right side became a creation of hundreds of birds from a nest and from this point on, multiplication and new forms are taking place in time.”

Fisch drew the mock-up for Creation and the painting was done by then U of M Art Department students Stephanie Mann and Taylor Costello.

Creation was originally commissioned for his friend and colleague, Dr. Robert Blum, who recently donated the piece to MIDB.

While Fisch passed away this past June, his legacy lives on through his writing, art, and the Fisch Art of Medicine Student Awards for U of M medical students. Read more about Fisch in Pearls of Wisdom.