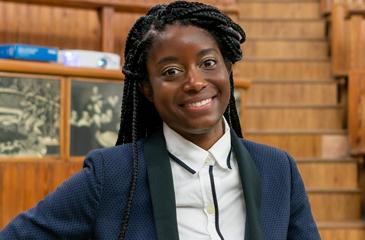 A Dynamo Reaches Out

“My story is kind of strange, and it’s not as clear as others,” says Anita Randolph.

Randolph, an assistant professor in the Department of Pediatrics, began with a fascination for exotic cats like cheetahs and tigers, which led to an interest in strokes in nonhuman animals, which led to neuroscience and a groundbreaking study of blood-brain barrier dysfunction after smoke inhalation injury.

And before she knew it, she had become fascinated with all aspects of neuroscience.

“It didn’t matter if I was working with Alzheimer’s disease or PTSD—as long as I was in the field learning, I was totally happy,” Randolph says.

Her U of M career began when she was at Oregon Health and Science University and met Damien Fair, co-director of the U of M’s Masonic Institute for the Developing Brain (MIDB) and recent MacArthur Fellowship winner, at a conference.

“I ran up to him and said, ‘I’m the student you’re supposed to meet, and we’re going to work together,’” recalls Randolph, who now directs the Community Engagement and Education Core for MIDB, a collaboration that fosters healthy brain function in children.

With Randolph, community engagement is a way of life.

For example, the local Somali community asked her for help with a project to bring culturally responsive clinics to children with autism spectrum disorder. They had purchased buildings, but needed staffing and training. Randolph acted as a liaison with relevant contacts in the medical community to create a coalition with which the group could consult throughout the process. This ensured they could navigate the complexities of insurance and not pay for training sessions, which could be costly and unnecessary.

Another ongoing project involves working with Native American and Somali communities to have English words —for example, the name of an emotion or neurodevelopmental disorder—displayed with an accompanying folk story, connecting it to their unique culture.

"My greatest mission in life is to be a link in the chain, a bond of connection between people," Randolph says.

This story was originally published as a feature by the University of Minnesota on April 28, 2021.