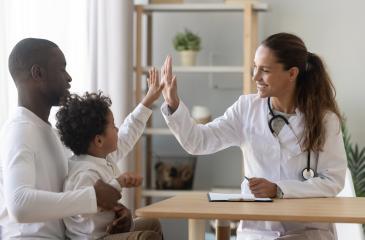 “When you hear the hoofbeats, think horses, not zebras.” This phrase, often shared with medical students in their training, encapsulates the challenges patients with rare disorders face as they seek a diagnosis and treatment. And it’s the reason the zebra is the symbol for rare diseases.

Every year on the last day in February, the National Organization for Rare Disorders (NORD) represents the United States in a worldwide campaign to raise awareness of the more than 7,000 rare diseases that impact more than 300 million people globally, including 25 million Americans.

A Global Leader in Rare Disease

The U of M has been at the forefront of advancing care of people and families touched by rare disease conditions. In November 2021, NORD awarded the U of M and MHealth Fairview Masonic Children’s Hospital the designation as one of 31 NORD Rare Disease Centers of Excellence across the United States, recognizing its commitment to advancing care and expanding access for people with rare diseases and increasing awareness of rare diseases in the broader medical and patient communities.

Julie Eisengart, PhD, LP, is an associate professor in the Department of Pediatrics and the director of the Neurodevelopmental Program in Rare Diseases (NPRD). A pediatric neuropsychologist, Eisengart specializes in rare neurodegenerative disorders of childhood and works with patients from infancy to young adulthood.

Since its inception in 2020, the NPRD has brought together diverse specialists who have been working in rare disease to deepen the understanding of the functional, quality of life, and mental health impacts of rare diseases. Much of this work is building on the legacy of the U’s pediatric neuropsychology program, one of the first in the U.S.

“While this team has been doing this work since the ‘80s, we’ve expanded our specialization,” said Eisengart. “Now our team is a pretty special group—neuropsychologists, neuroscientists, autism specialists, pediatric psychologists, developmental behavioral pediatricians, and more. We work hard to measure and define the function and quality of life for people with rare conditions. Then, we help determine the life areas that need support and treatment.”

When it comes to treatment, the team often holds key roles in clinical trial design and execution, including meticulous measurement of cognitive ability, and correlating it with biological markers such as brain MRIs, to detect improvements from new therapies.

“We are also committed to advocating for patients and family members,” said Eisengart.

For children with a rare disease, the journey to a diagnosis can be long.

“For some children who look and act unaffected, it can take up to seven years for a diagnosis although the time can vary widely,” said Eisengart. “As time marches by, some diseases may cause issues that cannot be undone if left untreated. It’s incredibly challenging, especially when suffering could have been prevented with early intervention and treatment.”

Recently, Eisengart was involved with a broad coalition of experts advising on the addition of Hunter syndrome—a rare, progressive genetic disorder caused by a missing or malfunctioning enzyme—to a list of conditions to screen in newborns. Through this coalition’s work, the Advisory Committee on Heritable Disorders in Newborns and Children determined that Hunter syndrome should be added to the Recommended Uniform Screening Panel for newborn screening nationwide.

The Neurodevelopmental Program in Rare Disease partners with other entities across the U of M, and was recently moved to the Masonic Institute for the Developing Brain (MIDB)—an Office of Academic Clinical Affairs center committed to its goal of advancing brain health from the earliest stages of development across the lifespan.

“We’re really excited about MIDB and the opportunities for research, collaboration and serving our community,” said Eisengart.

Eisengart sees great value in the connections and diverse perspectives of MIDB. Recently, the NPRD hosted an international master class on a group of rare diseases called the mucopolysaccharidosis disorders (MPS). An attendee from the class had been working with a group in MIDB, and this group had an international collaborator from Africa that had expressed concerns about seeming loss of skills in two young boys in a small village in her country.

Through photos and description of their challenges, the clinicians across groups joined together and drew in Eisengart who confirmed these young boys indeed had MPS. They pursued further international collaboration, which identified a neurogeneticist from the United States, who happens to conduct research only a few hours from their village in Africa. This physician returned to Africa and immediately set up an in-person appointment with the family to give proper care and relief of some of the highly painful symptoms.

“This is just one example of how powerful these collaborations can be when we respect and honor each individual and serve our communities in the best way possible,” said Eisengart.

For rare disease advocates such as Eisengart, advances in screening and early diagnosis are a key piece to early intervention.

“If everyone links elbows to keep their eyes out, it can be a small part of protecting against life-limiting complications,” she said.