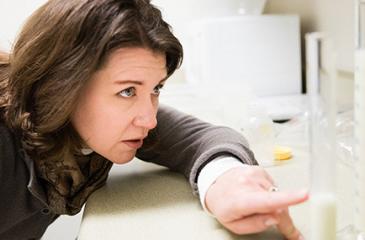 Nearly 20 percent of children and adolescents and 14 percent of toddlers in the United States are obese and researchers are trying to figure why. One major influence, among many possibilities, may be what a baby eats during their critical first six months of life and how it sets the stage for their continued growth. Ideally, breast milk is their only food during this critical stage. Given the importance of breast milk, School of Public Health Professor Ellen Demerath has been conducting a long-term study to analyze its complex composition and track the ways it relates to growth and weight gain.

As a part of that larger MILk study, Demerath recently published a paper in the journal Obesity measuring the levels of appetite-regulating hormones in the milk of women who had varying weight status before, during, and after pregnancy. Demerath looked at appetite-regulating hormones in breast milk because some previous research suggests that high levels of some types may interfere with the growth rate of children during their early months.

“Breast milk is complicated, and through this new research, we found its composition really does differ and it depends to some extent on the mom’s weight status,” says Demerath. Read full story: Measuring appetite-regulating hormones in breast milk.