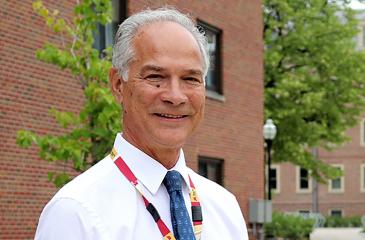 M Health Fairview Neonatologist Michael Georgieff, MD, will serve as co-director of the Masonic Institute for the Developing Brain, a joint clinic and research facility that opens to patients this fall.

Opening this fall, the Masonic Institute for the Developing Brain (MIDB) comes at a critical time for Minnesota families. Though reported childhood developmental and mental health concerns are increasing statewide, it takes almost two decades on average for scientific discoveries to transform clinical care.

As a joint clinic and research facility, MIDB is designed to bridge this gap and bring new research to patients and families faster. Developed through a partnership between M Health Fairview and the University of Minnesota, the facility is the first of its kind in Minnesota. It will advance both knowledge and treatment of brain development and mental health disorders in childhood and adolescence.

Longtime M Health Fairview Neonatologist Michael Georgieff, MD, will help lead the institute alongside Damien Fair, PhD. Georgieff also serves as a professor and the Martin Lenz Harrison Land Grant Chair in Pediatrics at University of Minnesota Medical School. We asked him about his involvement and what the institute – which opens to patients Nov. 1 – means for Minnesota families.

Why were you chosen to help lead the Masonic Institute for the Developing Brain (MIDB)?

My involvement with MIDB grew out of my work in the Center for Neurobehavioral Development. CNBD is a multidisciplinary research facility run by University of Minnesota Medical School and the College of Education and Human Development. It involves 12 departments and five schools across the university.

Currently, CNBD houses over 35 studies on children’s brain development and functioning. We aim to better understand how early development impacts how people think, learn, and express emotions into adulthood. I’ve led CNBD since it was founded in 2000.

One of the exciting things about MIDB is that it will combine a leading-edge research facility with an M Health Fairview clinic that serves children, teens, and their families.

This story was originally published on July 8, 2021 by M Health Fairview.